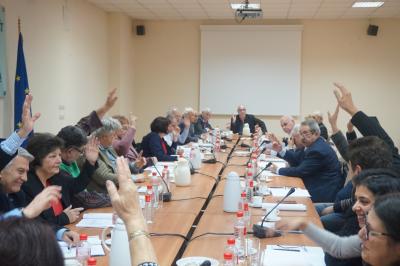 The Economic and Social Council (ESC) adopted a resolution on the promotion and use of small and medium-sized enterprises in the growth markets. The ESC Resolution addresses the Proposal for a REGULATION OF THE EUROPEAN PARLIAMENT AND OF THE COUNCIL amending Regulations (EU) No 596/2014 and (EU) 2017/1129 as regards the promotion of the use of SME growth markets COM/2018/331 final - 2018/0165 (COD).

ESC supports the European Commission's proposal in principle and stresses in its resolution that since nearly 99.8% of the working companies in Bulgaria are in the SME segment and the Bulgarian capital market is currently dominated by such public companies (98%), the proposal is of major public importance. ESC stressed the changes that will create the conditions for overcoming the excessive administrative burdens on SMEs both in the registration of public markets or the issue of shares and bonds as well as on the volume of information disclosed by these issuers to the national competent authority and the public. This would ease the access of small and medium-sized enterprises to a cheaper resource for development through capital markets as an alternative to bank lending.

ESC emphasized that the Proposal for a Regulation will have to be accompanied by changes in national legislation. In this regard, ESC is concerned that if future legislative amendments do not introduce additional criteria and mechanisms that distinguish the companies whose instruments are admitted to trading on the Bulgarian Stock Exchange (BSE) from issuers to be traded on the market for growth of SMEs, this will create conditions for marginalization on the Bulgarian capital market and the objective of attracting large investors will not be achieved.

In the resolution ESC analysed the state of the Bulgarian capital market and the expected effect on it of the adoption of the Proposal for a Regulation. ESC drew attention to the fact that in Bulgaria 75% of the jobs are provided by 99.8% of the working companies belonging to the SME segment. Therefore, the creation of a favourable institutional and legal framework, in line with the economic conditions and social relations in the country, is of utmost importance.  The ESC noted that the Proposal for a Regulation is based on one of the three European definitions of SME, according to which SMEs are enterprises whose average market capitalization does not exceed 200 million Euros. Hence, ESC paid very serious attention to some of the features of the capital market in Bulgaria that would qualify it as a growth market in general. ESC considers that if other criteria and mechanisms are not adopted in national legislation that would distinguish SMEs admitted to the growth market by issuers, that have acquired public status, the capital market in Bulgaria will face a real risk of being identified as a growth market. ESC also raised the issue why after providing relief for companies traded in growth markets, the Bulgarian capital market remains overregulated and every year the requirements for disclosure of information and regulatory compliance of public companies are increased.

ESC suggested that these problems should be solved in two ways: by initiating a procedure for modifying the definition of SMEs, taking into account the degree of development of the Bulgarian capital market or by amending the rules of the Bulgarian Stock Exchange in the part on the requirements to be met by issuers for admission to trading on the regulated market in issues of financial instruments that are traded or will be traded on a main or an alternative market. In this respect, it is necessary to introduce additional criteria for SMEs, which will cover the companies whose financial instruments will be traded on a separate segment of the Bulgarian Stock Exchange - a growth market for SMEs. ESC also insists on basic principles such as "think small first", "only once" and the principle of silent consent to find legal expression and guarantee both in the EU and in Bulgaria.

The resolution makes a number of recommendations for improving legislation on promoting SMEs to market in the growth market. The document also addresses issues that concern the overregulation in our country, as well as to the so-called "dormant stocks" of mass privatization. These stocks account for about 26% of the shares of public companies and often form up to 30% of the ownership of some holding companies. According to the ESC, the state must resolve the issue of "dormant stocks" through regulatory changes to "wake up" these assets.

By this resolution, ESC calls on European and national institutions to accelerate the development and adoption of a robust regulatory framework to support the financing and development of small and medium-sized enterprises.