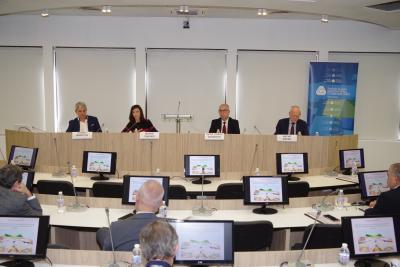 Before adopting its opinion, the Plenary Session of ESC held a discussion and consultation with the Bulgarian EU Commissioner Mariya Gabriel on the challenges and solutions that Bulgaria and the European Union can offer to achieve the ambitious goals of the European Green Deal. In the presence of the European Commissioner, the rapporteurs on the ESC opinion - Plamen Dimitrov and Vasil Velev, presented the main positions of the document. They emphasized the undeniable need to undertake measures to reduce the share of the carbon economy and supported the EU Green Deal initiative. At the same time, they pointed out        that if Europe wants to be a world leader in the process of achieving climate neutrality, it is necessary to develop a new type of European diplomacy that looks for supporters among non-EU countries. From a Bulgarian point of view, the two rapporteurs on the opinion emphasized that the intermediate targets set in the Green Deal by 2030 are too ambitious and may have a restrictive effect on Bulgarian industry and the labour market. According to them, the transition to a low-carbon economy should be smoother, as well as economically and socially just.

EU Commissioner Mariya Gabriel outlined the European Commission's positions aimed at achieving the goals of the Green Deal, emphasizing that it is one of the European Commission's main priorities, along with digitalisation and Europe's goals for the people. She emphasized the opportunities that the European Green Deal opens up for states and stressed that each of them, including Bulgaria, must consolidate its clear position and defend it with arguments in the process of ongoing negotiations. According to her, the guiding principle for the European Commission is that political ambition should not be at the expense of social justice.

In her presentation before the Plenary Session of the ESC, Mariya Gabriel highlighted several main opportunities that open up for both Bulgaria and other Member States. The European Commissioner stressed on the insufficient participation of the Member States of Central and Eastern Europe, including Bulgaria, in European programmes such as Horizon Europe, in the Clean Hydrogen Alliance, where there are opportunities to join existing consortia and to acquire know-how, in the European Universities Initiative, in the European Innovation Council, and other EC initiatives. Mariya Gabriel encouraged businesses to participate in European projects. She also stressed that the European Green Deal could not have been possible without the realization of young people through much higher digital and industrial skills and highlighted the link between the European Green Deal, the digital transformation and social justice. The European Commissioner assured the Plenary Session that the financial mechanisms, proposed by the EC, which are to be adopted in the EU Multiannual Financial Framework 2021-2027, will ensure the achievement of the objectives of the European Green Deal.

Prof. Dulevski, President of ESC, stressed that ESC pays special attention to the European Green Deal, which will determine the development of Bulgaria and Europe for 30 years ahead. Bulgaria is one of the EU countries most affected by the forthcoming transformation resulting from the European Green Deal. Nevertheless, ESC supports the idea of the EU to be a leader in achieving climate neutrality, Prof. Dulevski said.

Following the discussion, the Plenary Session discussed and adopted the proposed draft opinion of the Economic and Social Council. The ESC position on the European Green Deal was adopted unanimously amongst the three groups in the ESC – employers, trade unions and civil organisations with various interests. This is the first institutional position on this topic in Bulgaria. The Bulgarian ESC will duly inform about its opinion all Bulgarian and European institutions, which are involved in the EU Green Deal, as well as the wide public and the media in Bulgaria.