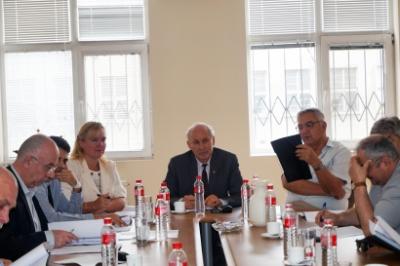 On 9 June 2017. The Commission on Budget, Finance, Insurance and Insurance called an extended meeting to discuss a draft ESC opinion on "Accelerating the preparations for accession of the Republic of Bulgaria to the Eurozone".

The consultation was attended by more than 20 members of the Ministry of Finance, the Ministry of Economy, the Institute for Economic Research and the Institute of Law of the Bulgarian Academy of Sciences, the Fiscal Council, the Bulgarian Macroeconomic Association, financial experts and members of the ESC. They all expressed the view that the proposed draft opinion was timely and expertly prepared. By signing the Lisbon Treaty Bulgaria has assumed the obligation to become a member of the Eurozone, everyone stressed. The remaining question is when this should happen.

The participants in the discussion united around two main conclusions. The first one is that an awareness and information campaign is needed for the pros and cons if Bulgaria joins the Eurozone. According to the opinion of most of the representatives of the institutions, citizens form their attitude to the forthcoming application of Bulgaria only from the past experience of other countries, without taking into account the most important positive premise in our country - the functioning of a currency board in Bulgaria.

The second conclusion is that Bulgaria fulfils all Maastricht criteria and this gives grounds for the country to declare its will to join ERM 2 in a time and manner that the government will evaluate. The draft opinion will be considered and adopted by the Plenary Session of the ESC.