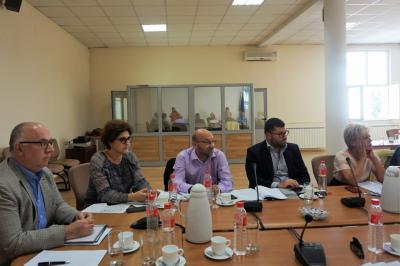 On the suggestion of the Ministry of Finance, the Economic and Social Council (ESC) held a consultation on a draft Analysis of the social and economic development of the country after its accession to the EU. This problem-oriented analysis should serve to identify the gaps in the development policies of Bulgaria so far and find solutions in the future national strategy document National Development Programme "Bulgaria 2030", says the special letter of the Ministry of Finance to the ESC. The National Development Programme "Bulgaria 2030" will determine the country's course in the next 10-year programming period with the relevant priorities, objectives and policies.

The purpose of the discussion was to improve and enrich the Analysis, which will help to clarify the scope and direction of the work on the creation of the "Bulgaria 2030" project.

Participants in the discussion expressed support for the draft Analysis and made suggestions for additions to it. On the part of employers, trade unions and organizations with other interests represented in the ESC, it was proposed to improve the structure of the document placing the section on Bulgaria's economy as the main focus due to the decisive importance of its topic for the overall social and economic development. In this context, Vasil Velev, Vice-President of the ESC (Bulgarian Industrial Capital Association), noted that in the Analysis as well as in the future Programme "Bulgaria 2030" special attention should be paid to the shortage of workforce in the country and to comment on all structurally determining sectors of the economy. Other participants in the discussion united around the proposal of Mr. Velev to attribute a special placeq section to the energy industry including energy poverty, energy efficiency and energy intensity. Milena Angelova (Bulgarian Industrial Capital Association) supported this emphasizing that all sectors of the economy should be analysed, including transport together with the alternatives to road transport - rail and air transport. According to Milena Angelova, the issue of providing incentives for small and medium-sized enterprises must also find the appropriate place in the Analysis and Programme.

Dimitar Brankov (Bulgarian Industrial Association) expressed the opinion that it is necessary to trace the main indicators of development for the past 30 years in order to more clearly distinguish the gaps, the errors and the reasons for them and to look for the most appropriate decisions in the strategic plan for leading development policies. He put forward the issue that after adopting the 10-year programme "Bulgaria 2030" it will be necessary to synchronize the other national development strategies, in order to achieve unified goals and to ensure their achievement with the necessary resources accordingly.

Valentina Zartova (Bulgarian Chamber of Commerce and Industry) and Radosvet Radev (Bulgarian Industrial Association) brought up the topic of reducing administrative burdens, which will improve the business environment and will contribute to faster economic and social development. According to Ms Zartova, measures to reduce administrative burdens need to focus even more strongly and link this problem to regulatory instability in our country, which hinders not only large enterprises, but especially SMEs and micro-enterprises. According to Mr Radev, to achieve this it is necessary to create and observe a comprehensible and transparent procedure for discussing important economic and social projects as well as for the timely presentation and discussion of the impact assessment of these projects.

Health care and education, according to the representatives of ESC, are the topics that deserve serious attention in the development programme for the next 10 years. Both Ivan Kokalov (Confederation of Independent Trade Unions in Bulgaria) and Vassil Velev stressed that disease prevention and prophylactic should be ensured by the relevant policies, measures and finances. Both stressed that it is worth doing a deeper analysis of health care as a system, analysing the reasons for its ineffectiveness, the reasons for the large amount of surcharge borne by the patient. They linked these problems and the resulting consequences with the negative demographic trends in our country and Katya Ribarova (Confederation of Independent Trade Unions in Bulgaria) drew attention to the social services sector, which is drastically underdeveloped in Bulgaria.

One reason for the significantly reduced number of students compared to the year 2000, according to Yanka Takeva (Confederation of Independent Trade Unions in Bulgaria), is the closure of many schools in small settlements and this, as well as other reasons for the current state of the education system, should be carefully analysed before defining goals and policies. She also stressed the need for a comprehensive change in higher education, especially in teacher training programmes which are obsolete, as well as the necessary change in early childhood education and child care.

The discussion also highlighted the issues of convergence, income, wages and overcoming regional and other disparities. According to Lyuben Tomev (Confederation of Independent Trade Unions in Bulgaria), in order to get a true picture of the convergence process, convergence should not be measured only in absolute numbers and percentages through GDP, but it should also be measured through parity purchasing power. He recommended that in the section dedicated to the labour market the cost of labour should be analysed alongside employment and unemployment. Associate Prefessor Vera Pirimova (University of National and World Economy) also supported the thesis that labour and income costs and their sources need to be further analysed. She stressed that the document would only gain in the economic part if the export and import analyses and their role and trends in GDP were compared. The problems of Bulgaria connected to the heavily polluted air in the big cities - Bogomil Nikolov (Bulgarian Active Consumers Association) and the maintenance of drinking water sources and sewerage - Nikolay Tsankov were also addressed.

At the end of the discussion, Deputi-Minister Mariela Nenova summed up the proposals and defined the consultation with the ESC as very serious, profound and constructive. She proposed a subsequent meeting with the ESC in the autumn, when the draft of the National Development Programme "Bulgaria 2030" is expected to be ready for discussion.