Introducing Aino-Kaisa Pekonen's speech, EESC president Luca Jahier spoke of the main challenges the Finnish EU presidency would have to address by the end of the year, including the growth of populism, threats to the rule of law, climate change and global issues. The implementation of Agenda 2030, said Jahier, will need a holistic approach that requires economic and social challenges to be addressed together.

Minister Pekonen began her address by acknowledging the difficult challenges Europe would have to face in the near future and admitting that her country's presidency would be happening at an interesting point in time, with a number of issues that must be addressed. With this in mind, she announced: Finland wants to have an impact on the EU's future and this future should be socially, economically and ecologically sustainable.

The EU's global leadership in climate action was therefore a key priority for Finland's presidency. To this end, it expected to reach an agreement on the main elements of a long-term plan committing the EU to climate neutrality by the end of 2019, as requested by the European Council.

The Finnish presidency's priorities mean that all measures designed to fight climate change have to be socially sustainable. In the words of Minister Pekonen: One of the main objectives of the European Union is to promote the wellbeing of its citizens. As the general view is that the goal of economic growth has been more prominent, this ultimate goal sometimes seems forgotten, but these two objectives do not rule each other out and are mutually reinforcing.

She continued: The European social model is based on the principle that no one is left behind and that people feel safe and cared for. The Economy of Wellbeing underlines the fact that this is not only vital from a human perspective, but is also our comparative advantage amid global competition.

As defined by the Finnish presidency's priorities, the Economy of Wellbeing means that economic growth is pursued in line with the UN 2030 Agenda for Sustainable Development. The EU must champion multilateralism and take the lead in solving global issues such as climate change, insisted the minister.

To achieve its goals, the Finnish presidency will strengthen dialogue not only with other global actors, but also within the EU with other institutions and partners, focusing particularly on civil society. Dialogue with social partners is one of the priorities of the Finnish presidency," Minister Pekonen concluded. "The EESC plays a key role and we are pleased that it is drafting key opinions that are in line with our proposals.

Committing the Union to significant emissions cuts to achieve climate neutrality by 2050 is the main target of Finland's EU presidency, which began on 1 July. The EESC will lend its support to the presidency's climate action and continue its own work towards the creation of an EU enabling framework for citizen and community-led climate initiatives.

Blue bioeconomy (Exploratory opinion at the request of the Finnish Presidency) 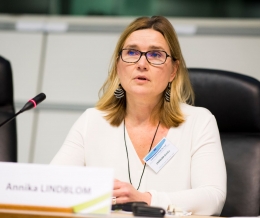 The EESC's activities during the Finnish Presidency. July – December 2019

In the second half of 2019, Finland will hold for the third time the presidency of the Council of the European Union. This is a crucial period when the EU faces many environmental, economic, social and societal challenges, including the still-ongoing Brexit process and threats from populist forces in the Member States.

Main priorities of the Finnish Presidency include sustainable growth, protection of the rule of law, security policy and climate policy. All of these go hand in hand with the priorities of the EESC and form a good basis for future cooperation. 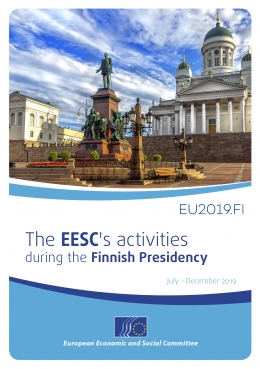