The European Economic and Social Committee (EESC) adopted at its plenary session on 24 January an opinion calling for an ambitious reform of the World Trade Organization (WTO) in order to overcome the current crisis while highlighting EU values and the EU's leading role in sustainability. WTO was created in 1995 as the guardian of international trade, but in the last few years its role has been compromised by increasing protectionism and major changes in the structure of international trade.

The WTO is the global international organisation dealing with the rules of trade between nations, and its goal is to help producers of goods and services, exporters, and importers conduct their business. However, recent developments in international trade have made its work difficult and created new challenges.  As Emmanuelle Butaud-Stubbs, rapporteur for the EESC opinion, pointed out, the reforms proposed have to be "in coherence with the values of the EU and with the role it can play in the world trade arena, and link investment to development".

The opinion includes proposals to avoid the incapacitation of the Appellate Body of the Dispute Settlement Body (DSB) of the WTO. To this end, the EESC supports the Commission proposals to extend the term of the judges currently in office, to increase the number of judges in the Appellate Body from seven to nine and to make provision in the future for recruiting full-time independent judges. Karl Brauner, Deputy Director-General of the WTO, took part in the debate at the EESC plenary session and confirmed the importance of keeping the Appellate Body operational: If it does come to a halt, the rules of international trade would no longer be enforceable. We would lose the progress made in civilisation and go back to the jungle. The rule of law would be replaced by the deal of the day and power would prevail over legality.

The EESC also suggests a reflection on the use of self-declaration for countries to define themselves as "developing countries" for the proceedings of the WTO, which enables them to benefit from certain rights such as longer transition periods. The EESC opinion proposed to replace this self-declaration principle with a set of predetermined criteria such as the market share in the global economy and human development indexes. In the same vein, the opinion also calls for measures to ensure greater transparency in foreign direct investment and public procurement, as well as a set of ambitious rules on key areas for the EU such as subsidies and countervailing measures, forced technology transfer, state-owned enterprises, special and differential treatment and e-commerce.

The EESC considers that it is necessary for the WTO to adapt to a changing world while delivering a truly global multilateral system of data protection, food safety standards and high animal welfare and environmental standards in agricultural production.

The opinion drafted by Emmanuel Butaud-Stubbs also advocates greater civil society participation in the work of the WTO, for example using the WTO Public Forum, in the form of a balanced and representative assembly of social and economic stakeholders from all different sectors and interests. It's also recommended to introduce coherence between the multilateral trade system and social and labour international standards through a more intensive cooperation between WTO and ILO on a sustainable management of global value chains, the creation of a working group on “Trade and decent work” and the inclusion of implementation of ILO Core Labour Standards in the Trade Policy Review.

The WTO of the future should also make a greater contribution to fighting climate change (waiver on carbon mechanism, investment in green tech and sustainable technologies, liberalisation of environmental goods and services, etc.) and to the achievement of the trade-related SDGs, in particular food security and sustainable agriculture. As Karl Brauner pointed out, the aim is to save the system and strengthen the role of WTO, which has given millions of people the opportunity to work their way out of poverty with dignity.

Press release 02/2019: EESC calls for ambitious reform of the WTO to address world trade challenges in coherence with EU values 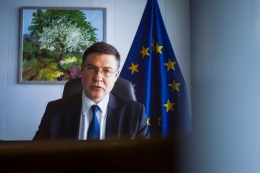 "Member States are working hard, but there is still a lot to do before national plans are ready," says Valdis Dombrovskis at the EESC plenary
Reference number:
17/2021

In a debate at the EESC plenary session on 25 March, the Executive Vice-President of the European Commission for an Economy that Works for People, Valdis Dombrovskis said that most of the national recovery and resilience plans (RRPs) are still at an early stage and that "there is still a lot of work to do before the plans are mature enough". He also stressed that trade policy has a key role to play in getting the EU economy back on track.