Following the proposal on the Irish backstop made by British Prime Minister Boris Johnson recently transmitted to Jean Claude Juncker, president of the European Commission, the EESC President Luca Jahier and the Chair of the Brexit Follow-up Group Stefano Mallia have issued a joint declaration.

President Luca Jahier said: As EESC, the House of the European civil society, we are closely following the latest proposals of the UK government. We fear that, for the time being, these proposals lack the necessary basis to secure a deal. In fact, we are worried that we are running out of time for an orderly Brexit, which should be a top priority. We have said since a long time that a no deal Brexit would have a very negative impact on both the UK and the EU and especially on civil society on both sides.

Stefano Mallia underlined: The UK has a relationship with the EU which is built over 45 years of EU membership. It is therefore a special relationship, which the EESC, as the representative of organised civil society, is determined to preserve. We must prepare the ground work required to ensure that the relationship can and will continue even in a post-Brexit era.

Both Jahier and Mallia expressed their concerns that a hard Brexit will disrupt the delicate balance currently in place in Ireland. Nevertheless, they hope that the next few days will see some significant progress in the negotiations and that the UK will come forward with a more workable proposal. 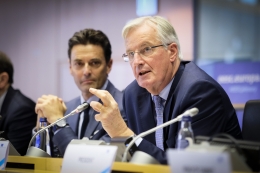 Michel Barnier calls for a close economic and strategic partnership between the EU and the UK after Brexit
Reference number:
42/2019

The European Economic and Social Committee (EESC) plenary session hosted a debate with Michel Barnier, European Union chief negotiator for Brexit, on 30 October. During the debate, Mr Barnier called for a close partnership between the EU and the UK after Brexit, bearing in mind that peace in Ireland must be a priority and that "the integrity of the single market is not negotiable".